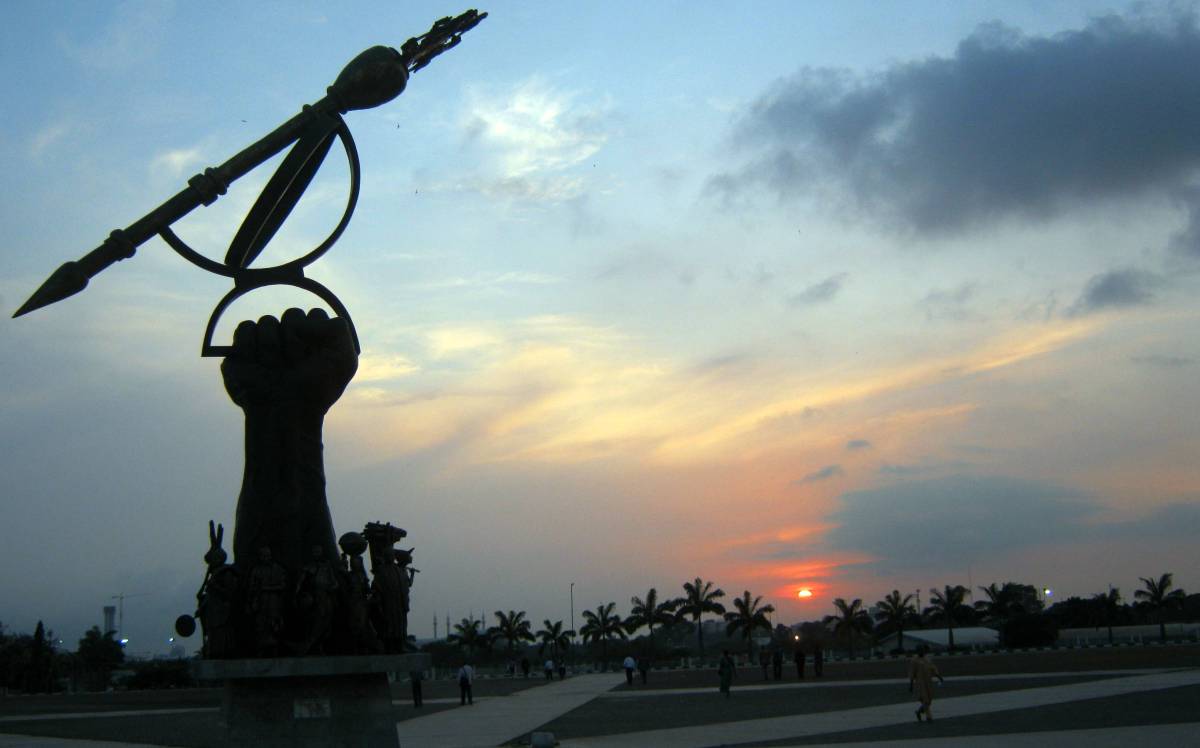 Upon my arrival at the Yar’Adua Centre for the event, I was stopped at the entrance by some security guards. They demanded that I show my invitation to the event before letting me in. Your guess is as good as mine regarding whether they were just catching some fun, or they thought I looked like a ‘small girl’.

Kashim Shettima (Governor, Borno State): I am pretty terrible at remembering the names of politicians so it is possible that this speech was delivered by the Governor of Kebbi State. He didn’t say much of interest. The main thing he said was that states needed more resources (presumably from the Federal Government) in order to bring development to the people. He did not speak much about trying to raise higher revenues internally, as he also mentioned that all the money from donors was still insufficient to solve the problems in his state. He completely missed the points of democracy and Africa, as he went on to speak about how global trade was not fair to Nigerian farmers because of the protectionist policies in some developed countries.

Chioma Akwuegbo – Social Media and Democracy: I have always admired Chioma. She is a member of the Global Shapers Hub, Abuja, and is the Founder of TechHer. Her presentation on the role of social media in strengthening democracy was not great however. She spoke a bit about the power of social media, but then dwelled a lot on the negative effects of social media. I did not hear much about the power of social media in shaping agendas, influencing public opinion, and mobilising the populace. She ended her speech by advising that before we posted something on social media, we should imagine that our post would be on a sign board above our heads, and decide if we wanted to go ahead with the post. Well.

Dipo Salimonu – The Role of Think-Tanks in Strengthening Democracy: I was excited to listen to this presentation, as I believed there was a lot that could be done with it. I was a bit disappointed however, when Dipo spent half of his allotted time reeling out the achievements of Ghana. Given that we were a proud Nigerian audience (for better or worse), we tried our best to clap half-heartedly as he told us why Ghana was awesome. However, when he exclaimed that Ghana’s stock market was the best performer in the world in 2017, and that the Brookings Institution had predicted that Ghana would have the fastest growing economy in Africa in 2018, with the World Bank predicting it will be the fastest growing economy in the world in 2018, our ‘bad-bele’ got in the way and there was radio silence. Dipo did go on to speak about think tanks briefly, but did not say anything remarkable. He spoke about the Kukah Centre and its role in influencing public policy. He gained some points by quoting Amartya Sen (Development as Freedoms) and Michael Porter (The Competitive Advantage of Nations). He lost most of the points he gained, however, when he said that the most awarded degree in Nigeria was Mass Communications compared to MBAs in the US. He went on to say that this is why Nigerian youths were on Twitter, while American youths were driving innovation.

Ndi Kato – Youth and Democracy: I had heard about Ndi prior to this event, and was looking forward to listening to her speak. She didn’t disappoint. She had a very strong presence and had a  big voice. She took the stage and reminded everyone that at 28 years old, she was a youth. She gave a very fiery presentation and informed the youths in the audience that she had studied power and had observed that nobody that struggled to get in power relinquished it easily. She basically made a call to arms, declaring that youths had to be ready to seize power as it wouldn’t be handed to them. I personally felt that her rhetoric was missing the truth that youths had to be ready to take this power rather than seize it for its own sake.

GUEST OF HONOUR ADDRESS
Vice President Prof Yemi Osinbajo was the Guest of Honor for this event, and he did not disappoint. I had listened to him speak a couple of times, and was once again amazed by his ability to present a speech (including direct quotations) without reading. He mostly introduced the President of Ghana and expressed the deep admiration he had for him. He also informed us about Ghana’s many great achievements.

KEYNOTE ​ADDRESS
I had previously heard of Akufo-Addo’s oratory prowess and was not disappointed. Although he read his speech out, it was actually very good. Regarding Democracy and Africa, he spoke about his firm belief that education was the way to move Africa forward. He spoke about the free Senior High School Programme his administration had launched, and how it would ensure that every Ghanaian had at least a complete secondary school education. He spoke about how Africa needs to have high quality human capital in order to compete with the rest of the world. His statements reminded me about an event that was said to have occurred sometime after the civil war. Although I don’t know how true this story is, and I also don’t remember who I heard it from (possibly Obasanjo or Atiku). It goes thus: After the Civil War, General Yakubu Gowon called a meeting with some top leaders in Nigeria and the objective of the meeting was to answer one question – How could Nigeria ensure that the disaster of the civil war did not repeat itself? The answer he was given was education. He was told that if every young child from the different ethnic groups in Nigeria were given high quality education, it was less likely that divisions along tribal lines would occur.

Akuffo-Ado also spoke about intra-Africa trade and the efforts by the African Union to promote this. He made some solid points on how we needed to do business with each other in Africa. This again reminded me of some remarks made at the China Europe International Business School (CEIBS) China Meets Africa Conference in Ghana in 2012. One of the delegates lamented about the fact that it was easier for Nigeria to do business with China, than with Egypt.

To conclude this very long summary, the event was not bad. I can’t say I got a lot of information on how to make democracy work for Africa but there were a lot of good points. Given that it was the inaugural lecture, I look forward to attending the subsequent events.

​I however went away from the event with a sinking feeling that Ghana is going to lead the charge in the rebooted Africa Rising movement (and this is not okay with me).
P.s Three months later I have taken a position with the Nigerian National Assembly – the seat of Nigeria’s democracy – as a result of being at this event. Who would’ve thought?

Just a girl. Any girl. You may have walked past me yesterday... View all posts by cestmoicarisse